It’s Not That Simple. 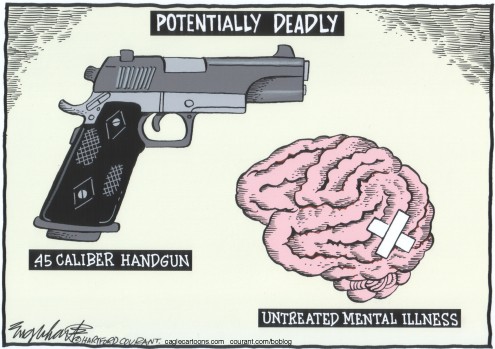 There’s a lot of experts in this world of ours these days. I see them on TV, on LinkedIn, and of course, our favorite soapbox, Facebook. They seem to have all the answers. Some even pretend to be thought leaders, whatever the hell that means!

Lately, everyone seems to be an expert on gun violence. Those on the right think more guns in more hands is the answer, including arming teachers. Those on the left think we have too many guns and that’s why we’re violent. The right fires back (pardon the pun) that mental illness is the problem, while the left returns fire saying we have too many assault weapons and that’s the biggest problem.

Really? I wonder about this question a lot. We all want easy answers, but is the answer really too many guns or not enough guns? If only it could be that simple.

There have always been guns in our fair land. It’s part of the fabric of our society. In our earliest days, they freed us from tyranny, in pioneer times they fed families, and in the Wild West, they kept rowdy, lawless towns lawful.

Carrying a gun was normal back then, but notice, nobody broke into the local schoolhouse and shot it up. My guess is, there were people with mental problems back then, but they didn’t shoot students or schoolmarms.

I grew up in a house with a gun. We had a Walther P38 under my parent’s bed. It was always loaded. It was never locked up. My dad would show it to us four boys once in a while. We knew where it was, but we also knew never to touch it. If we did, we would rue the day. We wouldn’t be able to sit for weeks after our dad took a hand to us for such an incursion.

Which got me to thinking. If guns have been part of our culture for so long, and mental illness isn’t the root cause of all these shootings, perhaps video games and violent TV shows are to blame.

Well, I grew up on some pretty violent shows. I mean, people got shot every night on Dragnet, Rat Patrol, Get Smart and every wild West show, including, Wild Wild West, as if one Wild wasn’t enough to show how wild it really was back then.

My son, for his part, has been playing violent video games since he was 8. He should be a mass murderer by now. But he is one of the gentlest souls I know.

Yes, these are just two people in this world of ours. But if the logic is that violent TV or violent games cause people to be violent, then Parker and I should be out there shooting the world up. Yet, we are just the opposite.

So what has changed? Is it really the ready availability of guns? Are there really more mentally ill out there as a percentage of society than there was in Dodge City?

I think perhaps the biggest reason we see more violence now than in the past is the breakdown of our social networks.

First, the nuclear family is history. Mom and dad both have to work to keep a roof over everyone’s heads, so kids are latchkey. When I was a kid, my mom would greet me when I got home. She would ask me how my day went and I didn’t get a pass. I had to tell her. Plus, I wanted to tell her.

My family was far from perfect, but we all would gather around the dinner table regularly and talk about our days. My parents knew what was going on in our lives. They were interested. They gently poked and prodded where appropriate and if there was ever trouble in our lives, watch out! My mild-mannered mom and dad could really cause some whoop-ass on the perpetrator, principal or bully.

Today, parents seem to treat their kids like accessories. They are shuttled off to ball practice, ballet or whatever pursuit. Worse, they are set in front of the TV at a very young age to watch “age-appropriate” shows while their parents indulge in their adult lives, rather than spending quality time with their kids. They let the kids run on autopilot rather than teaching them the family’s values.

And there lies another problem. When I was a kid, we were taught about the importance of respecting others, the meaning of the Golden Rule, the sanctity of life, and most important, consequences. We knew from an early age that real life was very different from the one showed on television. If someone on Dragnet died, you might see them in a Twilight episode in another week or two. In real life, if someone died, they didn’t come back. We understood death and its place in life. We understood the sense of loss and the sense of grief. And we understood consequences, which in my family meant a whoopin’ or time in the corner.

But we don’t teach these things to our children anymore and we rarely hold them accountable in a meaningful way. Now, before you get on me about the fact that you do, I am talking about society in general. If you learn about any of these mass murderers, you start to find that they come from broken homes, faced some kind of personal trauma, or acted out for any number of reasons, such as being bullied.

I was bullied. But I didn’t turn into a mass murderer. My mom and dad taught me how to cope with the bad things in our world, with the personal defeats, the setbacks, and the fact that life itself isn’t fair, even under the best of circumstances. We weren’t mollycoddled. We were taught to be tough, strong and resilient, to never give up, to face our fears and to deal with the inequities and inequalities of life. And when all else failed, to have a sense of humor about this wild ride we call life.

I’m not trying to have the answer or be a thought leader here. But I think if we look at the present and think about what is truly different from our past, it may be the fact that we aren’t treasuring the family like we used to, social media has become our new parents, brothers and sisters, and that in the process, we’ve lost some of most of our humanity, which has kept us moving together as a society since we climbed out of the primordial ooze.

You be the judge. And while you’re rolling this around in your head, shut off the TV, turn off the smartphone and spend some time with your kids. Trust me, it will never hurt.

In the Emerald City, knowing that all is not lost, if we only have the courage to find the way,

... other posts by admin