I came across a great quote the other day. It was by Heraclitus of Ephesus, an early Greek philosopher.

He said: “You can’t step into the same river twice.”

This took a while to sink in. And then I realized its profound meaning, that is so simple, yet so lastingly true. Change, whether we like it or not, is constant and inevitable in our lives.

While we’d like to think that change is happening at a breakneck pace in these times, it’s really been happening at a fairly constant pace through time. Changes only appear to be coming faster because 1) we’re in the middle of it, and 2) we now have instant communications to keep us abreast of all the changes as they happen.

As of late, there has a been a huge outcry about the growth of Seattle. There have been as many as 100 cranes in the sky at the same time, reinventing and reshaping a town that except for eight years, I’ve been a part of. I have seen it through its good times and bad. Through boom and bust. It has changed continually and unerringly, sometimes for better, sometimes for worse.

While I admit that all the faceless glass skyscrapers aren’t my cup of tea, they are a sign of success as a city. Seattle and its surrounding communities have grown up. The city is at the big boy table when it comes to being an economic force. It dominates the aerospace sector and is knocking on the door of the Bay Area to be #1 in technology.

Downtown, a place you never wanted to be in after 5 p.m. in the 1980s, is now alive nearly around the clock. Step out of a theater or restaurant and the sidewalks are crowded well after 10 o’clock, something that would have been unfathomable 20 or so years ago.

For the most part, we’re good with change as long as it agrees with us. Yes, some once great institutions and certainly some quirky and uniquely Seattle businesses are gone. But change is indeed inevitable, and the demise of a beloved institution is often because they have become unfashionable or unprofitable, not because gentrification or progress forced them out.

The most recent brouhaha is over the Showbox Theater. Other theaters have come and gone in Seattle over the last century. There was the famous outcry over the Music Hall many years ago, but it is all but forgotten now. Others, like the 5th Avenue, Triple Door and Paramount soldier on just fine, reinventing themselves and staying relevant.

And then there’s the Showbox, a relic of the past that rightfully has some relevance even today, except for it is also standing in the way of progress.

Now, I certainly don’t treasure the idea of another glass box being built on First Avenue, especially one filled with condos and the now famous and faceless street-level retail shops.

But we do need more housing. People want to live downtown these days and while it’s not something I would ever want to do, there is unprecedented demand, so much so that the Seattle School District is thinking about putting an elementary school somewhere downtown to handle all the families there.

At this point, I should remind you that I work in economic development. My job is to promote the state to bring businesses here. Companies create jobs. Jobs create paychecks for residents and paychecks generate spending which, in turn, spurs economic growth. It’s one big happy circle, and believe me, you want to be on the side of growth, not on the side of collapsing economy. For those here in the 1970s when Boeing crashed and burned, I don’t have to explain this.

It’s often been said that this is Seattle’s third gold rush. First, there was the real gold rush, then the post-WWII rush, and now this techno-driven third rush. It won’t last forever. It never does.

This is just the way the world works. As some long-dead Greek philosopher said it way, way back, “You can’t step in the same river twice.”

Now, I get all the nostalgia for days gone by. I still miss the Doghouse and Chubby and Tubby’s $5 Christmas trees. But there’s still plenty of old Seattle left. The Ye Olde Curiosity Shop, Pioneer Square, Pike Place Market, the Seattle Center, the Monorail, and Ivar’s on the waterfront instantly come to mind. 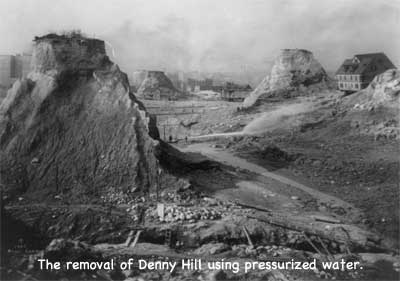 But time does march on. If it never did, the Smith Tower would still be the tallest building in the city, we’d be crossing muddy roads downtown and the Denny Mill would be the city’s biggest employer. If you wanted to get from Puget Sound to Lake Washington you’d have to carry the boat and traveling from Everett to Tacoma would take hours because Highway 99 would be the only thoroughfare north and south.

There are even times when we seem to have an uncanny knack for picking the wrong side. In the 1990s, Seattleites had the chance to create a 61-acre world park that would have connected South Lake Union to downtown. It would have cost taxpayers about $300 million to build an equivalent to New York’s Central Park. Paul Allen even loaned $20 million initially to buy up the property.

When the initiative failed, Paul decided to develop the land instead, and we now see how that turned out. I am certainly not about to blame him for Amazon’s sprawling campus and view-stealing skyscrapers. Real estate is, after all, a business, and we turned our backs on the idea of a new park, a park he wanted to help finance.

Seattle voters and residents have been fickle like this since the Denny party landed on Alki. We all say we want to cherish the past, but our history has shown a quirky desire to put the past asunder, build anew and then be wistful about the way things used to be.

It seems to be the Seattle way, to make way for the future while wishing things could just always stay the same. Unfortunately, you can’t step in the same river twice.

In the Emerald City, living in the present before I too become a recycled relic,

... other posts by admin